Last week was amazing, it was sad to see it come to an end.  Several of my family members and I went to San Diego to run in (or “support” those running in)  the Rock n’ Roll Marathon.  Scott and I then journeyed on to visit friends and family in our former home town, Orange County. 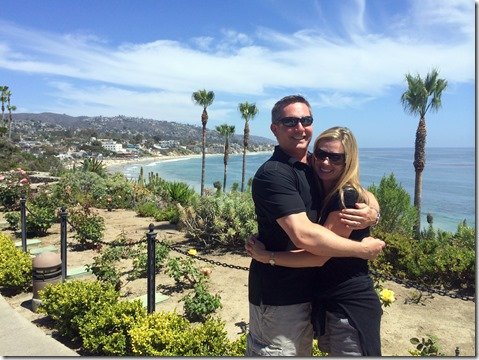 So, a few photos from the San Diego run, then a really interesting story about a historic home in Coronado we had the pleasure to learn about during a ‘private’ tour. 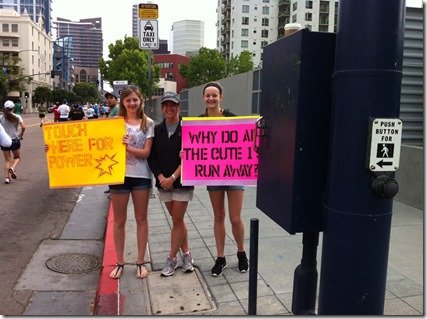 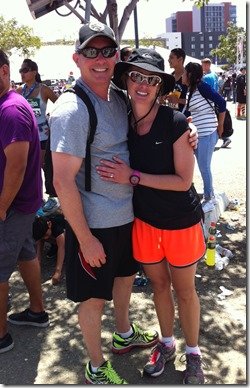 Early on, when I was still able to smile (and before the sun & heat came out!) 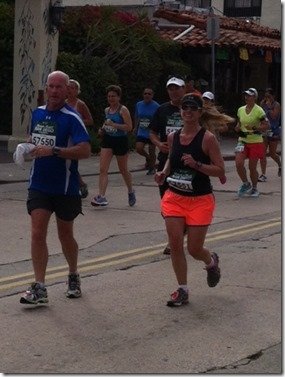 Marshall (my sister’s husband) and I with our free race beer post run.  Tasted nice and cold after our little jog. 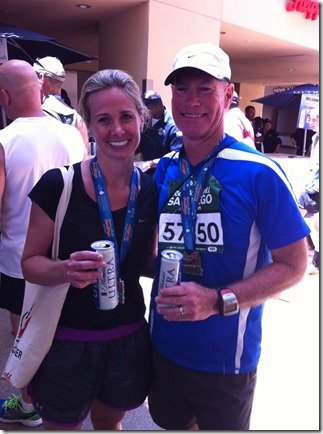 A family friend invited us to stop by her sister’s home (whom she would be visiting while we were in San Diego).  She said it was a historic home on Coronado island, just off the beach near the Hotel Del Coronado.  She thought we would like not only the home, but also the gardens, and boy was she right! 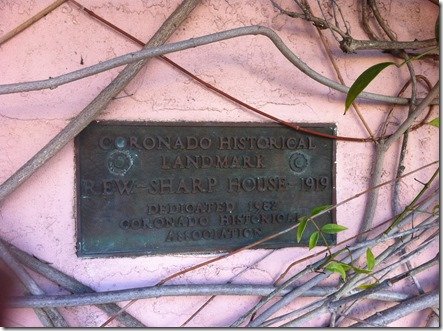 Just around the corner from the “Hotel Del” we saw the garden entrance. 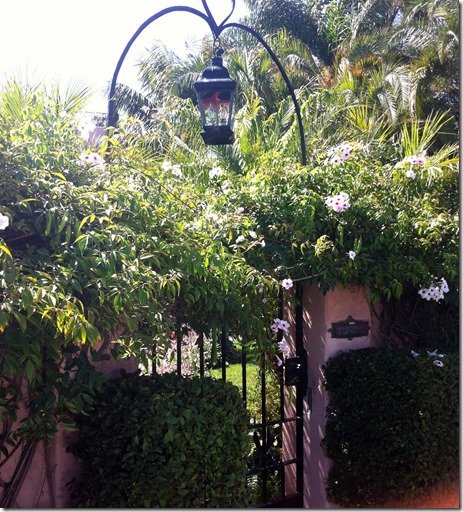 This is the front garden 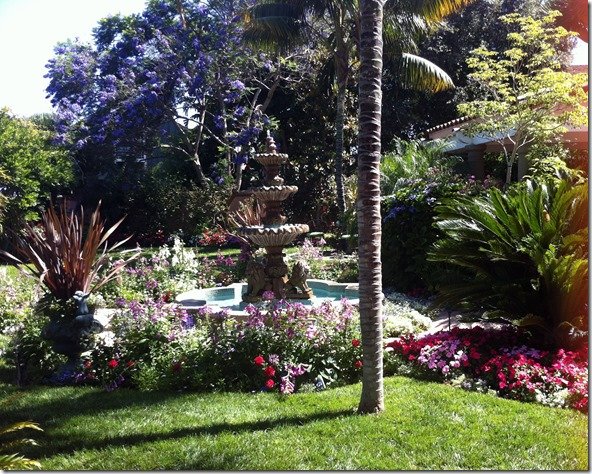 and initial view of the home. 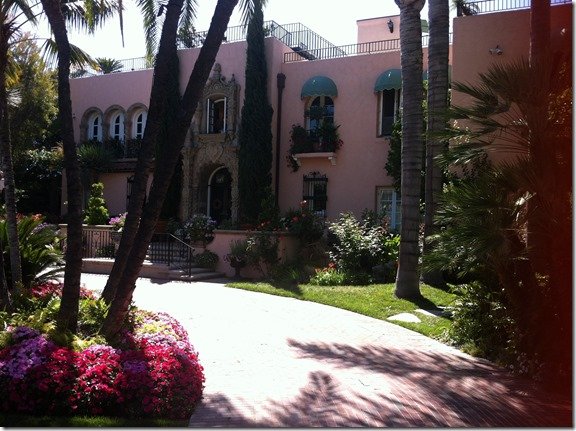 Inside, the homeowner has photos of the home in its original state, long before the neighborhood was developed. 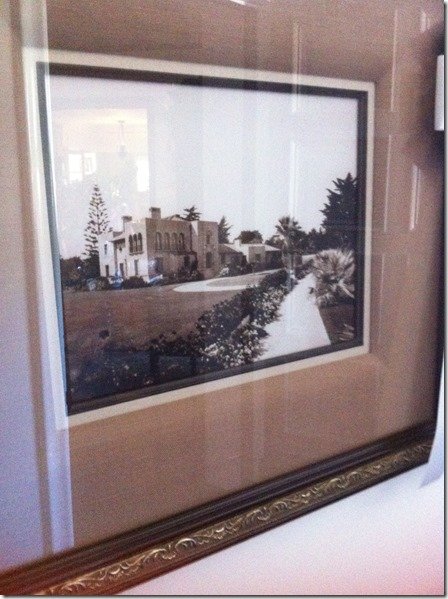 She also has photos of the original façade.  It is hard to tell, but the home is essentially identical to how it was back in 1919 when it was designed. 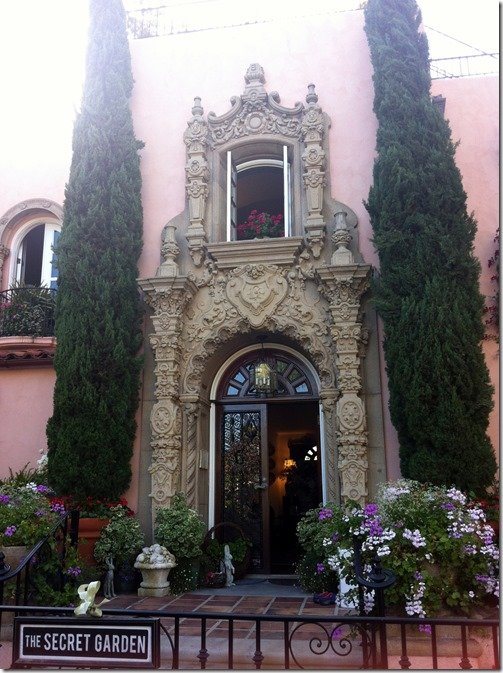 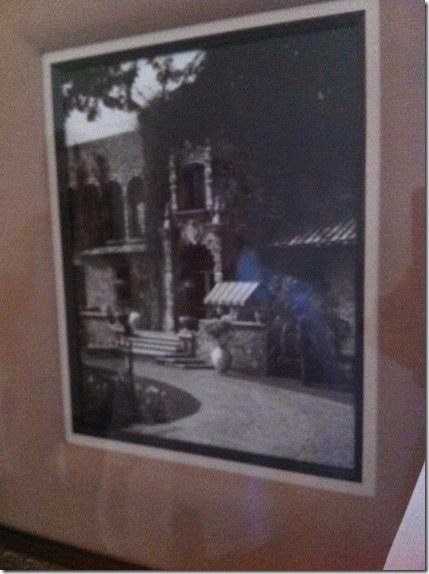 This house is known as the Rew-Sharp house.   The style is Spanish Colonial Revival and was designed by LA Architect Elmer Grey.  He designed the home in 1919 for George Rew, who was the President of Calumet Baking Powder.

The current homeowner purchased this clock, in honor of the original resident, at an antique shop and it hangs in the kitchen. 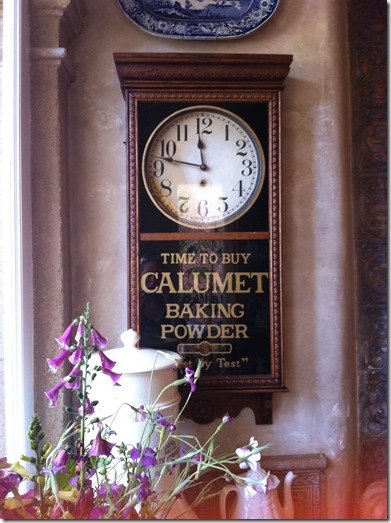 The house was sold in the 1920’s, then donated to the Red Cross for awhile.  The homeowner told us an interesting story that you won’t find written down at the historical society.  Apparently in the early 40’s, a gentleman was buying the home and was going to give half of the home ownership to his daughter who was getting married.  Because of the time period, he did not put the home share in his daughter’s name but in the name of her fiancé.

Unfortunately the marriage never happened, and the fiancé refused to give back his share of the home!  The home was actually split down the middle and had four feet removed in order for the father to keep his share and the former fiancé to keep his.  Here is a photo of the alley way where the house was divided.  They essentially removed four feet to separate the house into two homes.

The ‘main’ house lost the kitchen and part of the courtyard was converted into a kitchen.  The ‘new’ kitchen even has the original courtyard wall fountain and flooring.

This is a photo of the courtyard, with the French doors leading into the kitchen. 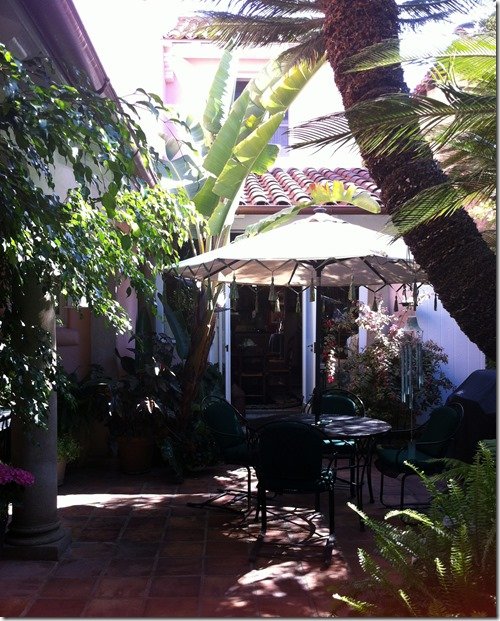 The ‘courtyard’ fountain, now in the main kitchen, along with the Spanish tile: 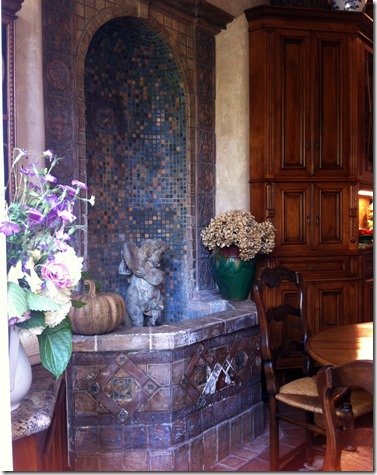 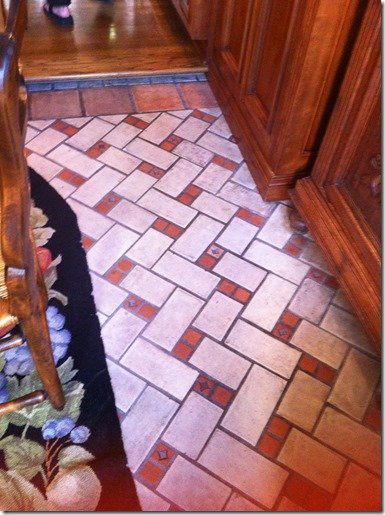 Some of the tile work on the interior, specifically on the main living room fireplace, was designed and made by Batchelder.  During the growth on Coronado he and workman came to the island and essentially set up something like a tent city for the production of his famous tiles which were used in several homes throughout the area. 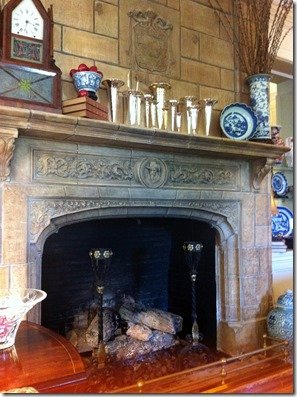 In addition to the historical elements of the home, this house also has some great rooms for ‘every day’ living.

This is the main living room.  I love the millwork and paint color.  The ceiling light fixture is original to the home. 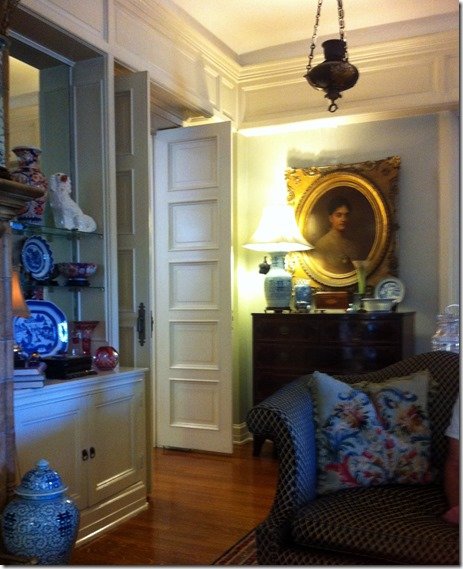 This room below is an upstairs sitting area (you might notice the doors in the exterior picture).  Two full walls have these amazing doors that overlook the gardens. 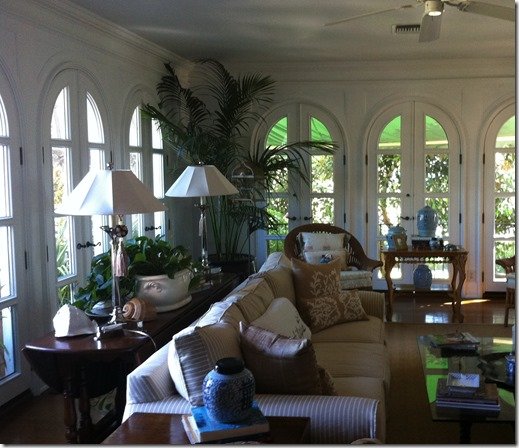 There is also a beautiful fireplace in this room and it truly makes you really feel like you are at a beach home.   Look at the old intercom system on the right side of the photo! 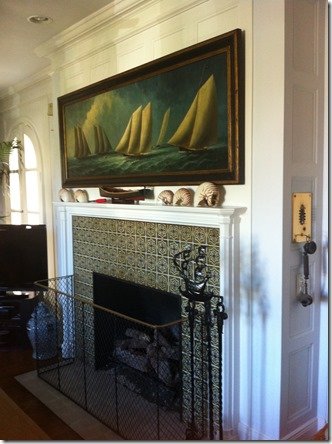 One of the guest bathrooms has recently been remodeled.  The homeowner did a great job in keeping with the style of the home (classic elements) but has modern features such as a zero threshold shower entry.  This is a great option for mobility. 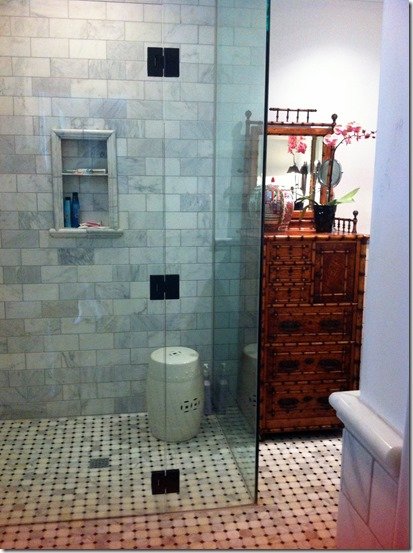 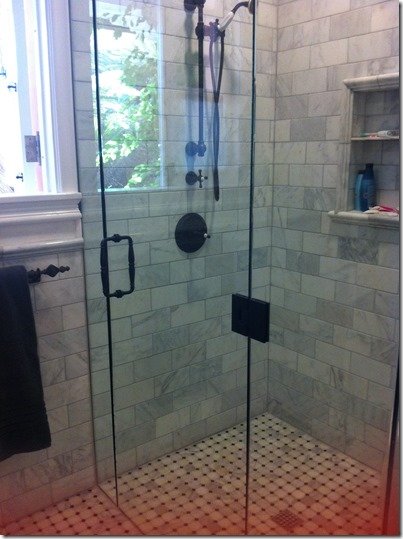 One last element… the entry hall.  This is a photo of the original stairwell. 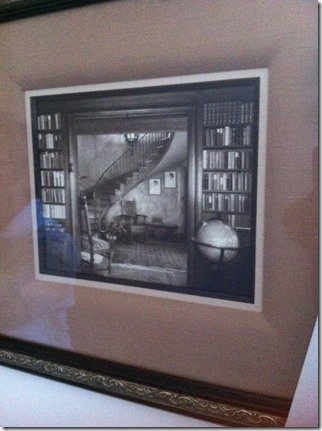 This is the stairwell today: 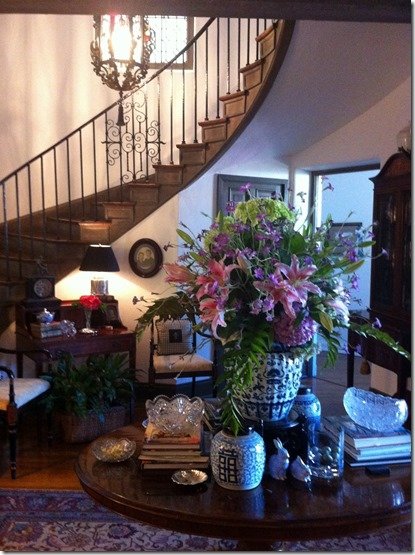 It looks the same today!  I think that is a testament to great design. Nearly a century later and the stairwell still looks amazing.

Here is a close up on the color (I know, my iPhone does not take the greatest photos).  The treads are wood and the risers a painted a pretty blue-green-gray color. 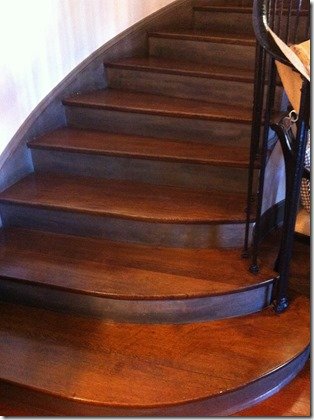 Here is a zoomed photo of the ceiling which is painted with a decorative detail. 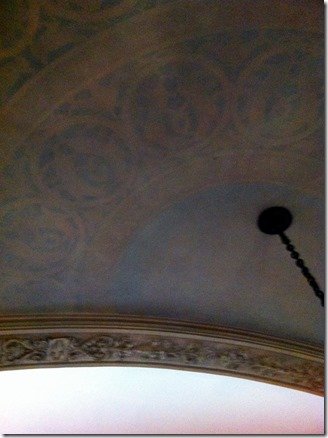 The entry hall also has these lovely wood beams.  All original.  Sigh.  It is hard to replicate true history and character like this. 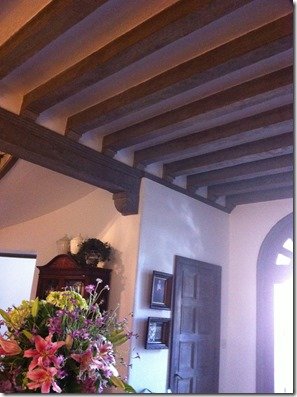 What a treat for us to have the opportunity to get a personal tour of such a wonderful, historical home.  As a designer, learning what features truly stand the test of time can only make us better stewards of our clients’ funds and better designers in the long run!

I’ve been making it a point to spend more time studying historical homes to get a better grounding in what is timeless and classic. I’d like to encourage you to think about doing the same in your hometown and as you travel across the country and world.  Learning from the past is a great investment in how you design for the future.

One response to “A Coronado Historic Home”