The week of August 6th has to go down as one of the best in my personal history.

2. I went to Dallas for the ASID Legacy of Design Awards Ceremony and won not one, not two, but three awards!

3. One other awesome thing for our retail happened which I can’t share just yet, but will as soon as I can.  It is so hard to keep a secret- ugh! 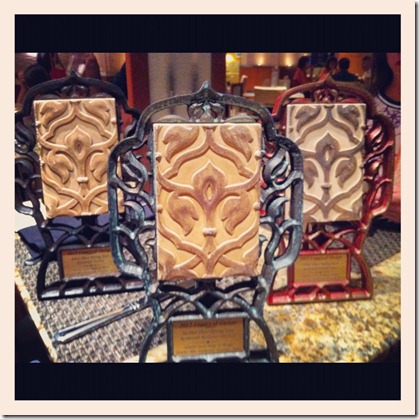 I am really proud of my 3 ASID design awards in the ‘Rising Stars’ category.  These awards are for the whole state of Texas and were custom designed by Luna Piena with the tile work provided by Architerra, which is based in Austin.

The awards I received were for:

The coolest part was that the ASID board and the Design Guide magazine were so organized and together, that they actually provided us with copies of the latest Design Guide issue (#22) which already listed our awards and photos of the projects which won 1st place! 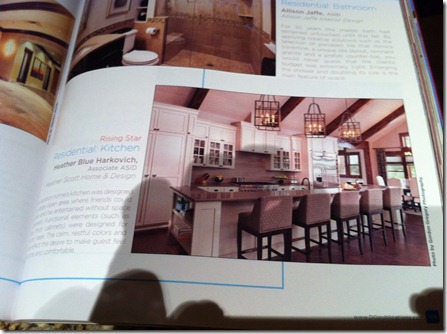 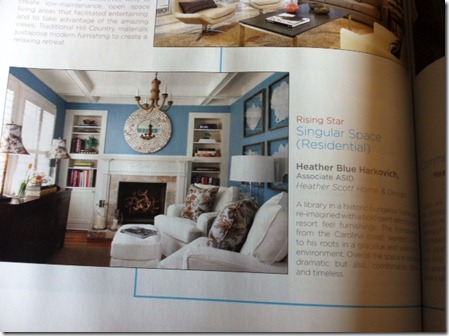 This was an amazing experience and I feel really blessed to have been able to receive these awards.

Ok, so Four Houses- we have heard a lot, most of it hil-ari-ous.  I told you I laughed until I cried.  It was crazy. 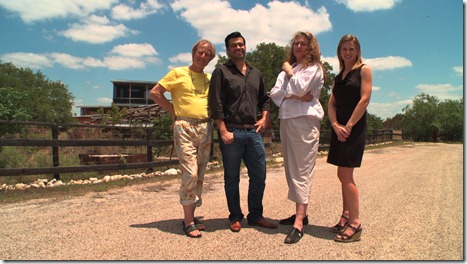 So, the most common feedback and answers:

1. Yes, we did wash our sheets where Talbot laid in the bed and yes, it was pretty shocking.

2. Yes, I thought that all their homes were weird, too.  Not at all what I thought when they asked me to be on the show.  That’s why I sounded a little snobby.  Being real, though, I always gave about 10 compliments before I gave a criticism, but reality TV is all about the drama, so that is all that made the final cut.

3.  Yes, I was more vocally opinionated than you have ever heard me be.  But, seriously, rabbits with antlers shooting you the bird and other rabbits making other obscene gestures, pegboard ceilings, hookah pipes and Bali rooms.  I would never go into someone’s home and be critical like that, but I can’t say I have ever been to anyone’s home that remotely compared with these 3, ever.

4.  Yes, Sallie really was that snarky.  We all laughed and all had a good time, and it was a reality show, but she decided she didn’t like me upfront and things never improved.  And for those of you who suggested it, I am not interested in just the two of us doing a show together.

5. No, it didn’t bother me they moved my accessories around.  I wasn’t remotely offended by anything they said or did, other than maybe lay on the pillow, which is pretty nasty.

6. Thanks for the compliments on the clothes and shoes.  That was a great confidence booster.  And you can obviously see why I can’t play poker.  Everything shows on my face, so at least you know where you stand and what I am thinking of if you pay attention.

1.  My dining cabinet is an antique from the late 1800’s, although ‘faux-tique’ is now one of my favorite, new words.  I do have fake plants, though.  Just saying.  I don’t like the bugs that come in when you have real ones.  We all make choices in life, some are important, some aren’t.

2. Our house is not worth $2 Million.  I wish- it is less than 1/4 that.  That was a typo.  It does make things a little awkward with friends and family who suddenly think you are a secret multi-millionaire.  Or kind of fun, in a twisted way.

Well, enough on that topic.

Hope everyone has a fabulous week.  Be on the lookout for What’s New Wednesday and an update on our new building on Friday!