After 4 months I can finally tell you about the TV show I am participating in!  I was contacted a few months ago by a casting company in New York to see if I would be interested in participating in a new home show for TLC.  The series would be filmed in several cities and each episode would feature one city and four homeowners.

The show is called ‘Four Houses’ and it begins airing with the New Jersey episode on July 2nd at 10pm EST.  The Austin episode (which I am in) is scheduled to air on August 6th at 10pm EST.

This is the only photo I’ve found for the show and I assure you it is not from the Austin episode!  It was mid- May when we filmed and it was already in the mid- 90’s.  Was it hot! 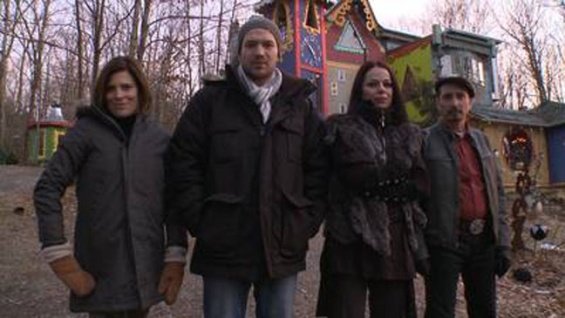 The premise of the show is similar to the popular “Four Weddings” show, where 4 brides compare their wedding plans to see whose plans are ‘best’.  We had 4 distinct home styles and believe me, it was a very interesting experience.

I can appreciate a wide range of design styles (from traditional to contemporary), even though I don’t decorate that way at home.  So, going into the show I expected that even though our styles were different, I would still be ‘wowed’ and appreciate what each home owner had done with their space.

That was not the case.  After this experience, I am so thankful for my home and my style.  I have absolutely no doubt that my design choices were the right choices for me and my lifestyle.  It is interesting that it would take a TV show to really teach me how much people’s lifestyle and personality are reflected in the style of their home.

I can’t wait to see the episode on air.  While filming the show, I have never been so personally offended, nor laughed so hard in my life.  It was a great experience and I don’t regret a moment of it!  I’ll remind you when it is on and I can’t wait to hear your thoughts!