Five weeks ago a couple stopped into our store on a Sunday afternoon while Scott and I were working.  They had decided to update their master bedroom and bathroom.  They had started the project and had decided on the “look” they wanted but were stuck on how to implement their vision.

The couple wanted a “Tommy Bahama”/”Out of Africa” style bedroom.  They had already purchased the bed and some furniture pieces, but were unsure how to progress with the rest of the room. 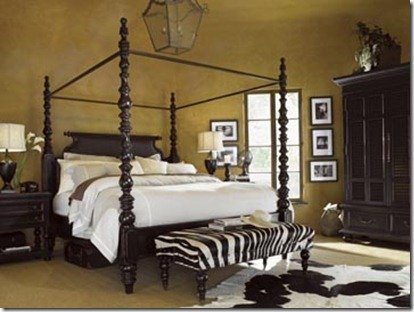 For me, it was a great conversation to have.  Living in Central Texas I get a lot of requests for the “Texas Tuscan” look.  But, having lived on both coasts, I have a special love for any design that incorporates a resort or beach style.

The couple called the next week to hire me to pull the room together, with the caveat that it be done in five weeks when out of town guests were coming.  Anyone in this business knows that can be a challenge, especially when the project involves customizing draperies, rugs and upholstery.  We met immediately at their home to discuss the project goals and take measurements and photos.  This is the state the room was in:

I pulled together a concept in one week and met with the couple to make their decisions.  I gave them three fabric schemes-(1) a navy, blue and white concept (similar to a Barclay Butera look), (2) a softer, watery palette with pale aqua, white and some florals, and (3) a little ‘Ralph Lauren’, with naturals, khakis and one of my favorite patterns, Schumacher’s Coconut Grove linen.  They selected the last option and we began implementing immediately.

One element that took the most upfront work was recommending items that were immediately available (had to be in stock and no possibility of backorders, which is really challenging when it comes to fabric these days).  There were a few hick-ups, the fan didn’t get shipped directly to their house, the bench fabric arrived at the upholsterer’s damaged and had to be replaced, the curtain fabric took almost two full weeks to get to the drapery workroom (forcing the workroom to rush), but in the end it all came together beautifully. 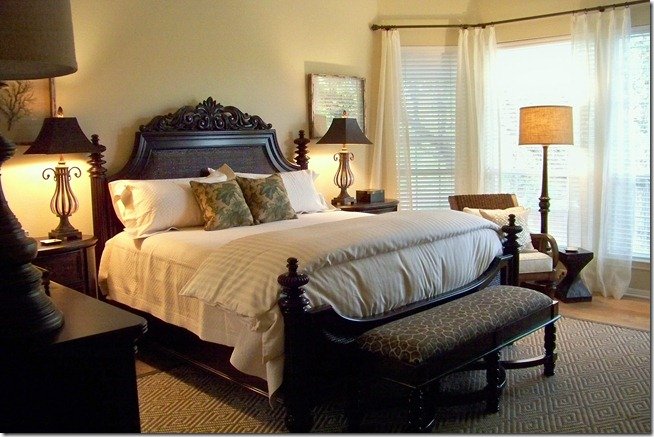 This is what their bedroom looks like now.  The fantastic rug is from Merida.  It has great color and texture (a little grayish) and is not your typical sisal.  We did gauzy, unlined, draperies (5 panels) along the bay window. 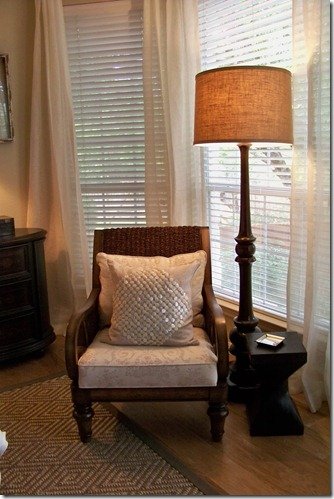 They have a cozy rattan chair for watching TV.  The wood side table is also a stool. 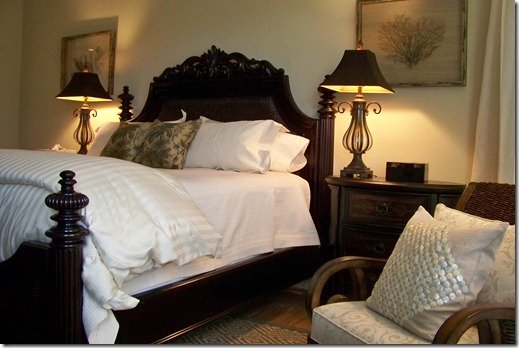 Here you can see both of the natural sea fans which are mounted on linen.  They add great texture and are really unique.  The lamps have blown glass bases with iron accents and the shades are a crackle leather look. 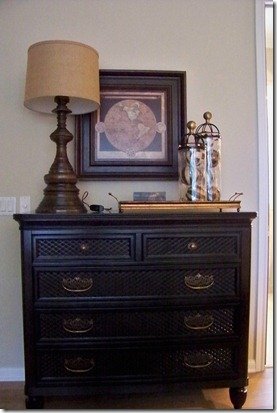 The husband has a dresser between the entry and bathroom.  We added a lamp with dimmer switch for soft lighting (I missed tucking that behind when I took the picture!).  The map picture lends to the ‘travelled’ look.  The tray has a reverse painted zebra pattern on the inset area.

The wall opposite the bed has a long dresser.  We placed a pair of large scale framed seashell prints to the left of the dresser.  The only thing left to do is to add the TV which will go between the hurricane and the orchid. 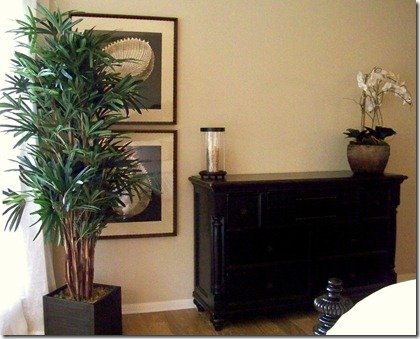 Again, one last look at the finished room: 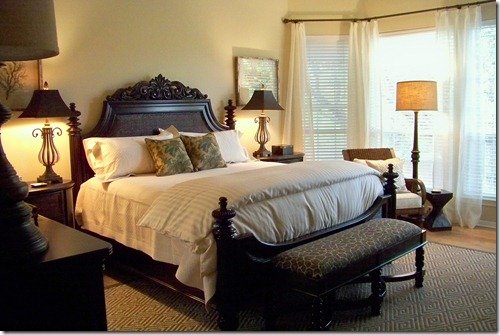 When I left they said they felt like they were on HGTV.  It was a great treat to work with such nice people.  They were easy going, had a clear budget, made quick decisions and were just a wonderful couple to work with.  I hope you like their space as much as they do.  Who says you have to take a vacation to enjoy your room?  Make your space the way you want it to be, not the way you think it should be just because you live in a certain part of the country!

One response to “A Resort Bedroom”